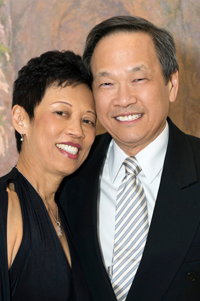 "Born in southern China, Mr. Long, at age 6, came with his mother to the United States, where his father was already working and supporting the family long distance. Growing up in urban South-Central Los Angeles, Mr. Long was encouraged by his traditional Chinese parents to pursue a 'safe' profession, such as engineering, medicine, or law. But his tendency to take risks and his aptitude for economics led him to a successful career as an industry leader in real estate investments and developments."

John Long is the Founder and Chief Executive Officer of Highridge Partners, a diversified investment company specializing in identifying, providing capital to, and managing undervalued assets and corporate opportunities related to real estate. Mr. Long has also encouraged the intellectual power of academics to pursue research and industry initiatives that would lead to redefining the role of real estate in the 21st century.  In 2000, he founded the Real Estate Center at UCLA, and serves as its Founding Chairman.

The Longs have a long history of impactful giving through their Long Family Foundation (LFF).  LFF was formed in 1992 as a vehicle for the Long family to promote and support religious, educational, cultural, and research endeavors that align with their values.  Through the years, LFF has supported numerous organizations across the globe, such as endowing centers of education and research at major universities, funding Christian churches and missions, installing public art, investing in rising nonprofit leaders as well as creating and sponsoring initiatives that bridge U.S.-China relations. Their philanthropy is often characterized as active and highly relational, and is intended to be catalytic and transforming.

Mr. Long graduated with honors from UCLA, where he received his Bachelor of Arts degree in Economics, and earned his Master of Business Administration degree from Harvard Business School. Mr. Long has actively served on boards of numerous organizations including the UCLA Foundation Board of Governors, the UCLA Anderson School of Management Board of Visitors, and the Asia Society of Southern California Advisory Board.

As the U.S. and China become more interconnected with each other’s economy, the Longs recognize the need for a bilateral, open, and public platform from which Chinese and American scholars, industry leaders, policy makers and practitioners can share ideas and nurture a broader understanding of business, legal and socio-economic issues. In 2010, John and Marilyn established the Long US-China Institute at UC Irvine, a campus-wide initiative created to foster greater mutual understanding and stronger relations through bilateral research and outreach between these two great nations.

"The Long U.S.-China Institute is dedicated to studying contemporary Chinese society, politics, and culture in all of its complexity. We are intent on fostering bilateral engagement between China and the U.S., and we support scholarship and events that facilitate mutual understanding and that highlight a diversity of voices and disciplinary approaches. Our core faculty come from the Social Sciences, Humanities, Law, Business, and Social Ecology and are engaged in cutting edge research on contemporary China."